As the veil of stigma lifts, with each new revelation of the impact of mental illness on life and death, public interest and sophistication around personality and relationships are rising exponentially. Media portrayals, celebrity, depictions of superheroes villain, and journalistic analysis of are trouble psychologized, with an exponentially-increasing sophistication.1

Borderline personality disorder (BPD) often captures the public eye, typically with romanticized depictions of troubled heroes and anti-heroes struggling with demons within a moral context. The reality is less sanguine, despite flashes of excitement and stimulation.

BPD is characterized by chronic feelings of emptiness, emotional instability, tormenting fears of abandonment and rejection, identityul disturbance with an unstable sense of self, difficulty controlling impses leading to reckless behavior, difficulty controlling anger with aggression, consistently intense interpersonal relationships with dysfunctional “either /or” thinking (“splitting” and “projection”), suicidal and/or self-destructive thoughts and behaviors, and periods of transient paranoia and dissociation.

Per the National Institute of Mental Health NIMH, personality disorders are common, affecting over 9 percent of people–and 1.4 percent have BPD. The rate of BPD is high in mental healthcare settings, affecting 12 percent of outpatients, nearly 25 percent of those admitted for psychiatric treatment, and almost 30 percent in forensic populations.

Borderline personality disorder often occurs alongside depression, substance use problems, abuse and trauma history, difficulty with personal and professional functions, and other factors, elevating the risk for serious health problems and other adverse outcomes.

How can we get a handle on these long-term risk and protective factors? In their paper in the journal Personality and Mental Health, Grenyer et al. (2022) reported findings from following a group of treated for BPD a year associated patients after treatment to look at key day-to-day factors with good outcomes.

One year after the completion of the program, they were interviewed by a trained research psychologist who was not involved in their prior care. In addition to demographic factors, participants were rated on a series of measures.2

Participants were asked to report subjectively how much they thought they had improved and participated in semi-structured interviews asking how they were doing. Themes from these interviews were analyzed with standard qualitative analysis, allowing not just for quantitative findings based on numerical ratings but also to derive recurring, generalizable themes from actual patient experiences.

Explanations from the original study provide an at-a-glance view of key differences: 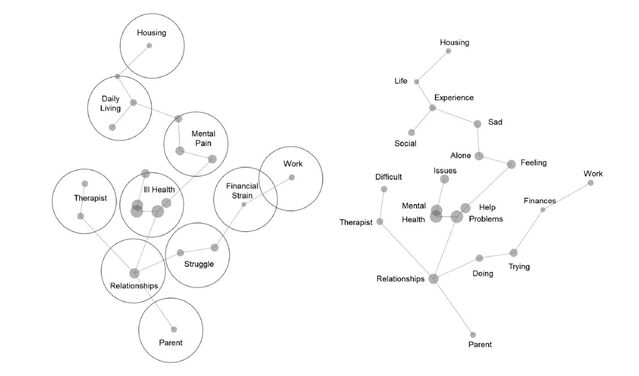 A year later, participants in the working well group reported greater employment and occupational function and more robust social connections. They lost fewer workdays and were reportedly more productive when they did work. Those in the functioning well group reported better clinical ratings and subjective improvement across all dimensions.

Those in the functioning poorly group reported minimal progress with a corresponding negative view of progress.

1. Love of Self and Others. People functioning well reported better quality close relationships and more enduring relationships through adversity. They reported that being a parent was important in being loved and loving others. Having increased child well-being in this group and providing meaning and purpose–taking care of others was a strong motivator. They were more likely to have more positive self-appraisal.

Those in the functioning poorly group reported greater relationship instability and loss. They reported they had reduced support from friends and family. Additionally, they were more likely to describe having people in their lives who were also struggling without reporting the resilience-enhancing of supportive relationships, as well as fewer connections.

2. Making a Contribution Through Work and Study. Those in the functioning well group noted the importance of purposeful activity, paid, and volunteer work. Being productive and successful enhances self-efficacy and self-esteem. Participants emphasized the importance of meaning in work, for example helping children in need, as a key factor.

Some also reported social isolation and avoidance interfering with feeling good, for example, staying home from school due to depression or social anxiety leading to lagging performance. Difficulty getting motivated was a common problem.

3. Stability in Everyday Life. Folks in the functioning well group described that day-to-day life was less disrupted by stress and unresolved trauma. While traumatic experiences came up, they were easier to accept and were less disruptive emotionally. Stressors (eg, dealing with financial issues) were seen as necessary to deal with and get through rather than as insurmountable obstacles or proof that everything was bad.

They were prone to value and mention positives, including appreciating having basic needs met and working steadily, having family and friends, and enjoyed being productive with a positive outlook on continuing to build in the future.

By contrast, those in the low-functioning group experienced stressful events as crises, with difficulty coping adaptively (eg, problem-solving, reappraisal) and a tendency to interpret events negatively and anticipate worst-case scenarios (ie, catastrophizing, all-or- nothing thinking, and over-generalization). It was harder for them to stay in the moment and contextualize stressors within a bigger context. They reported having more difficulty basic needs like housing and financial security.

This study highlights several important aspects relevant for people with borderline personality disorder, with broader implications about what factors contribute to overall life satisfaction. This research with an outpatient psychiatric population found that one year after treatment, patients tended to be doing quite well or quite poorly; there was no middle group.

While this study did not directly measure underlying factors related to personality and resilience or report on co-morbid illnesses such as depression and complex PTSD, these likely play a critical role in determining who does better and who is worse.

Catching who is at risk before discharge from treatment and developing an ongoing plan would likely convert some from poor to well-functioning, particularly with a focus on bolstering drivers of the three themes of love of self and others, making contributions through work and study, and stability in everyday life.

Identifying patients at risk for relapse would allow for close monitoring and early intervention following discharge: those with co-morbid psychiatric or addiction problems; with reduced resilience as evidenced by lower support, self-efficacy, and difficulty coping; with fewer external resources; and in unstable relationships would likely benefit from psychoeducation about when to seek help and intermittent check-ins. It also suggests that additional treatment might have been useful following discharge from the main program.

Future research can build on these findings to enhance outcomes. Individuals can use this knowledge to help guide self-assessment and make positive changes toward greater well-being and health.

To find a therapist, visit the Psychology Today Therapy Directory.