A Survey of 233,087 “internet users” in 34 countries that measured “mental wellbeing” found that the percentage of respondents who were “distressed or struggling” was highest in English-speaking regions of the world, where 30% fell into this category. The regions that scored the best in this survey were Latin America and Europe, with countries in the Middle East and North Africa falling in the middle of the pack.

The survey was conducted by a nonprofit organization, Sapien Labs. This particular effort, dubbed the Mental Health Million Project, is designed to provide an “evolving global map of mental wellbeing,” with the hope that the results will provide insight into the cultural factors that promote wellbeing, and that these findings can then be put to use to enact “evidence-based social policy and interventions.”

To assess mental wellbeing, Sapien Labs used the Mental Health Quotient (MHQ), an anonymous online survey that can be completed by speakers of English, Spanish, French and Arabic in 15 minutes. It assesses 47 elements of mental function and maps them to diagnostic criteria for 10 disorders listed in the DSM-5, with aggregate scores used to position individuals on a spectrum from “distressed” to “thriving. The 15-minute survey also produces sub-scores across five “broad functional dimensions”: drive and motivation; mood and outlook; cognition; social self; and mind-body connection.

The most notable “big-picture” finding in the Mental State of the World 2021 report is that residents of wealthier countries that “prioritize individualism and achievement” were more likely to chalk up scores that put them into the “distressed or struggling” category for mental wellbeing. In the wealthiest countries, the respondents’ scores for “cognition, drive and motivation” were the highest (of the countries surveyed), while their “mood, outlook, and social self” scores were the lowest.

Remarkably, Venezuela topped the list of 34 countries for its aggregate score of “mental wellbeing,” while the UK and South Africa were at the bottom of the list. However, the authors do caution that these are results from “internet users”, and not necessarily reflective of the mental and emotional wellbeing of populations without access to the Internet. 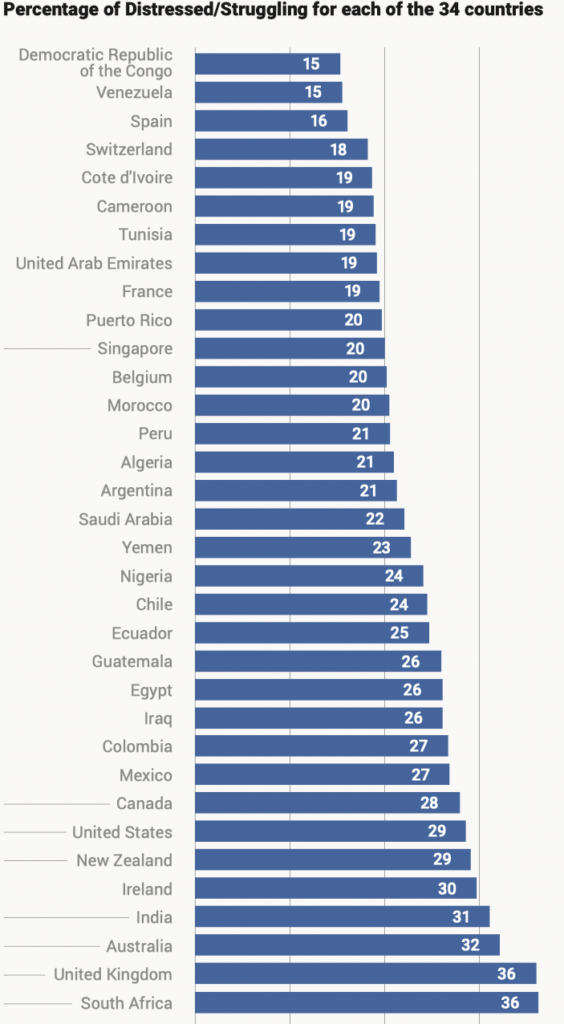 Indeed, there is a strong suggestion that Internet use itself—or perhaps social media engagement—may be harmful to emotional well-being. There was an “alarming plummet in mental wellbeing across successively young generations” during the global pandemic, and the “difference in mental well-being between those aged 18-24 and those 65 and older” was notable in all of the countries surveyed. There was no other population comparison—that of gender, employment or education—that resulted in as large a gap in well-being.

In the “core Anglosphere” ie, the United States, United Kingdom, Australia and New Zealand, 50% of those 18-24 years old landed in the “distressed/struggling” category.

Moreover, it appears that this gap is not due to mental wellbeing improving as people age, but rather there has been a “progressive decline across generations” over the past decade. Surveys of wellbeing in 2010 typically found that young people “had the greatest happiness and wellbeing,” and now there is a steady descent in wellbeing from the oldest to youngest cohorts.

In their report, the authors consider the potential impact of income inquality, political instability, and environmental toxins as causative factors, and they call for further investigation into these elements. The report also mulls the role of the internet and mobile phones, considering not their usage per se but the large chunk of waking time that might, instead, have been spent on “in-person social interactions that are required to build and maintain a strong Social Self, the dimension most significantly lacking in younger adults.”

However, the decline in global mental wellbeing that is charted in the report did occur during the global pandemic. The percentage of respondents in the “English speaking world” falling into the distressed or struggling category jumped from 14% in 2019 to 30% in 2021. This worsening in mental wellbeing is “significantly correlated with the aggregate stringency of government Covid-19 measures across both years.”

In other words, the shut-down measures—and the relative number of cases and deaths—took a toll.

Here are other findings to be found in the report, most of which fall into the self-evident category:

The Mental State of the World 2020 report collected data from 49,000 responses in eight English-speaking nations. The current 2021 report is based on 223,087 responses in 34 countries; for 2022, the anticipated goal is half a million responses in 72 countries, with the ultimate aim of pulling 1 million online responses annually.